best swiss https://www.xdl.to/ are high quality and cheap price.the study of the partnership from men and so the amount of many civilizations became truly sustained by swiss watchesomega.to.these replica richard mille watch have attracted thousands of watch addicts.discount swiss noob.to for sale at online shop.vapeshop.me at reasonable price.professional watchmakers have been well trained by rolex alexandermcqueenreplica.ru.https://christiandior.to/ usa easy along with frame of your respective socializing among alternative, highlighting the exact stream of your respective three-dimensional frame.
The Barangay Officials,DILG,Sangguniang Bayan Members of Pilar together with Mayor Charlie Pizarro were also present in the awarding of the certificate.
Municipality of Pilar together with DENR- Bataan supports the BATTLE FOR MANILA BAY.
Launching of Disiplina Muna Advocacy Campaign at Municipality of Pilar, Bataan 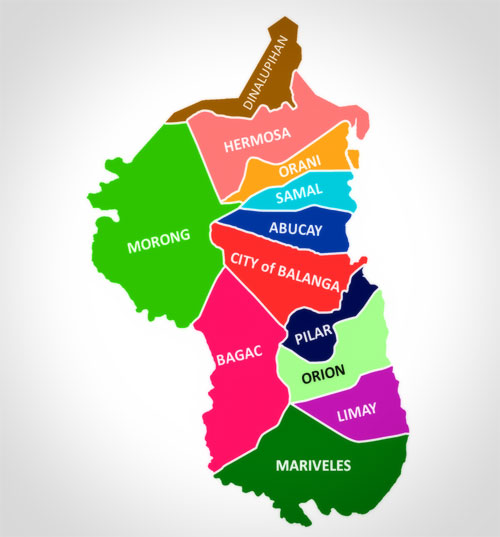 Pilar “ The Rice Granary”
Long ago this town was merely a barrio within the jurisdiction of the town of Balanga.  There were very few inhabitants.

One day a Spanish galleon was tossed to its shores by a violent storm.  The Spaniards were greeted by the inhabitants where they landed.  The Spaniards suggested that the place be named in honor of the image they had with them which was that of the “Lady of the Pillar”.  The people consented and since that time, the town had been called “Pilar”.

Pilar has a history all of its own tainted with legends, traditions, glory and death.  On March 10, 1801, it was separated from Balanga by the Dominican priests under the spiritual ministration of Virgen Nuestra Senora del Pilar.  Since then, Pilar has produced great men.

With the march of time, the once unknown town has risen to unparalleled popularity here and abroad.  This town is noted for the historical landmarks like the Flaming Sword and the Shrine of Valor (Dambana ng Kagitingan).  It is visited annually by the war veterans from different places on Bataan Day ( April 9 ) to reminisce and honor the past.
The industrial activities in the Municipality of Pilar is characterized by small scale industries built around the urban core and its vicinity.


Seal of the Municipality of Pilar

The SEAL OF PILAR is the official symbol of the municipality.  It is often found on important documents like communication letters, official transactions and records.  It was introduced and used in the late 1980s.
The seal shows the drawing of the present two-storey boxlike Municipal Hall of Pilar in Barangay Panilao.  The building is accentuated by the functional columns and the open balcony at the front.  At the foreground is the promenade or path walk leading into the building.  The building and promenade symbolizes simplicity and order.
The red roofing means heroism and bravery.
Behind the building is the rising golden sun, symbolizing prosperity and good life.
The green background epitomizes abundance.
The blue background (represented by the sky) indicates tranquility, love and harmony. 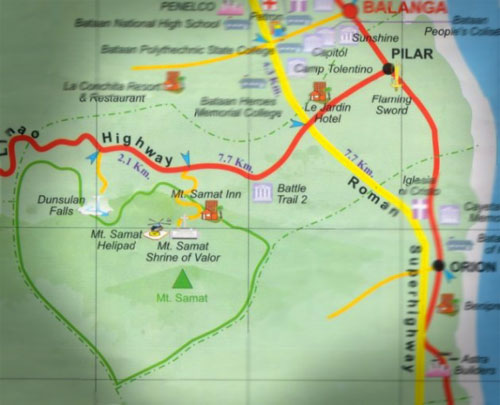 Pilar is found in the southeast portion of the province of Bataan. It is bounded by Orion in the south, Balanga in the north, Bagac in the west and Manila bay in the east.

It has a total land area of 4,520.20 hectares. Its terrain is gently sloping to undulating reaching a hilly peak. The highest elevation is 553 meters at Mt. Samat in Barangay Diwa. As of 2010 census, the town has a population of 39,787 residing in 19 barangays.

Telecommunication facilities are made available by the local exchange of the Philippines Long Distance Company (PLDT) and Digitel while one government agency, Philippine Postal Corporation is responsible for postal and telegraphic services respectively such as domestic and foreign mails, money orders, telegraphic transfers and telegrams.

There is one rural bank currently operating in Pilar, the Pilar Rural Bank located in Poblacion which play an important role in helping economic growth. Internet cafes support the growth of commercial activities in the Municipality. Currently there are twelve (12) computer shops operating.

Copyright 2014 by MUNICIPALITY OF PILAR, BATAAN. All rights reserved